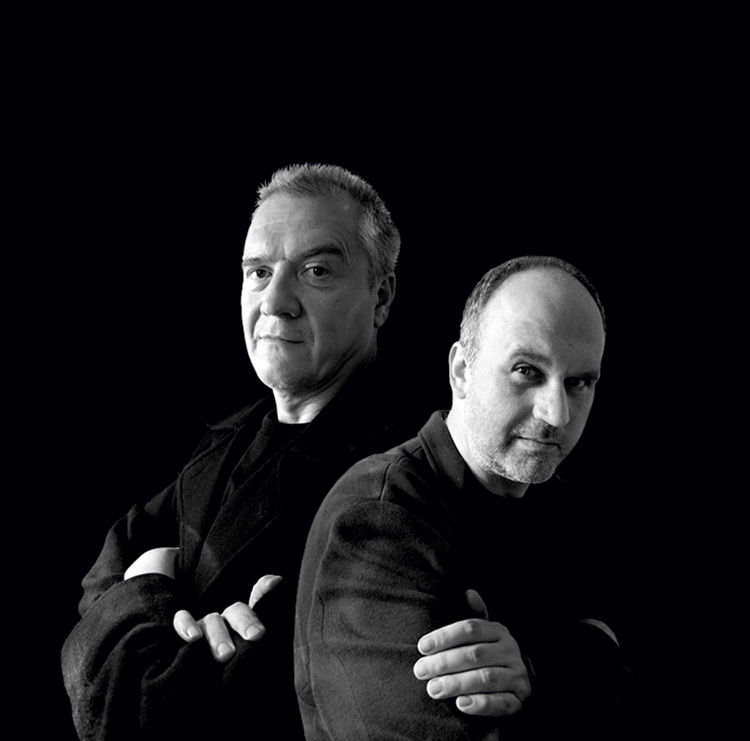 We come from the time that is rightly called the "cultural revolution of the 80s", and the environment that is known as the "Leningrad painting school." Numerous art groups flourished then and we mostly associated with such groups as the New Artists, Mitki, Necrorealists, and later, The New Academy. We were young, free and cheerful. Today we like to believe that the project "Semichov and Kuzmin" ideologically and emotionally follows up on THAT time, full of cheerful aesthetic radicalism, a bit of insanity and a good deal of geekiness.

In the early 90's we both were part of the art group Mitki and then were prompted to leave as we felt that the idealistic story of the Mitki was coming to an end, reaching an impasse while running short of new plastic solutions and developing an established pictorial tradition. We saw new challenges ahead and as soon as we realized that our views on art happened to coincide we decided to join forces. Then it was an entirely natural thing for us to come to work together, although it stays a mystery for both of us up till now how exactly this could have happened. Everything in our family background and education was so different, if not diametrically opposite, that us coming together looks nothing but a trick plaid by the "cultural revolution".

I come from one of those families commonly described as intellectuals. My parents, medical doctors, encouraged my art inclinations without hesitation. The father's library was full of awesome pictorial material, and my favorite pastime was looking through pictures in all sort of medical atlases and reference books. I remember that authors of some books on psychiatry were keen on illustrating the chapters on hallucinations, oneiroid states and the like with painting by Goya, Bosch, Max Ernst, Alfred Kubin, Chagall, Dali, and that was one of the most vivid artistic impressions in my childhood. I realized that there was an art that was nowhere to be seen, and this insight, of course, was at the base of the feeling I always had while visiting numerous Soviet art museums afterwards. More than anything, I was bored there. Only the old masters did not disappoint. Well, later on, when I entered the Mukhina Art school, I learned to love Kuznetsov, Labas, Drevin, the group "13" and so on, but I always knew that there was an art somewhere that went beyond limits, an art never seen before, great and beautiful.

I was born in the most common family, my father was an industrial worker, my mother, an employee. We lived in Leningrad, in a huge shared apartment in the Petrogradsky district just a floor below an apartment where Alexander Rusakov, an outstanding Soviet artist, lived with his family. I cannot help thinking that I could have seen Mark Chagall who visited Rusakov there in 1974. In 1987, I got to know the Mitki group and a year later I contributed to their exhibitions in the Artist's House on the Kuznetsky Most street in Moscow. I never had a systematic art education, although I made several attempts: when I was a kid I took exams at an art school, then enrolled in the studio of Vasily Suvorov in my teens. Once I had an intention to take a prep course at the Mukhina Art school but teachers there, good people, having seen my works, said: you don’t belong here, go non-mainstream. So I went non-mainstream, right to the art group Mitki, which at that time was, undoubtedly, a nation-wide cultural phenomenon and the most famous group of artists. That was where I got both the professional knowledge and the understanding of the very foundations of art, — directly from the painters of the group — Alexander Florensky, Vladimir Shinkarev, Ivan Sotnikov and Alexei Semichov.

Together we started off with a joyful pop art: two meter canvases with cactuses and other signs of beautiful life under the warm sun. The second exhibition was completely different. It featured works that anticipated our subsequent development — a turn to the classical painting, totalitarian aesthetics, gloominess, to addressing every imaginable "phobia" — all of these in an ironic, mocking manner at times.

Some twenty odd years down the road we don’t have to ask each other anything, we do not have any disagreements or misunderstandings anymore. We just meet, discuss sketches and work. If there’s still anything left to ask each other, those would be the same questions of twenty years ago. Same questions that Gauguin had: Where have we come from?" Who are we? Where are we going...?

The Cold Forest
Semichov and Kuzmin 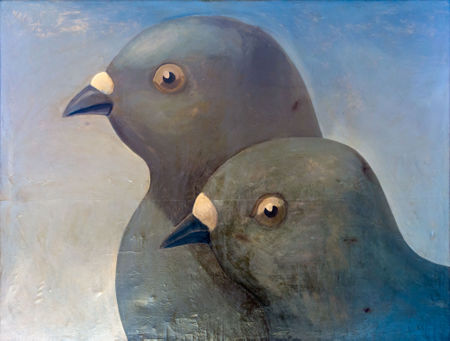