Searching For Freedom exhibition in Liepaja

Artists, like anybody else, can sometimes benefit from moving to a different environment, getting into an unfamiliar situation, meeting new people. Being in a different setting gives you a fresh look at the world around you, at the things that interest or concern you, and at yourself as well. We have invited two artists to stay in a completely new place to research side by side a topic equally important for them.

The lines coming from two geographical points, Havana and Moscow, have converged in the vicinity of Liepaja. The angle between these two straight lines, seen on the surface of the globe, is practically flat. Likewise, the artists have addressed the topic of the study from totally opposite perspectives. The theme of freedom chosen as the research object has become a difficult challenge for both. One has been seeking freedom in an external world, while the other has plunged into his own inner universe to find freedom in harmony with nature and himself.

Within the framework of this project we present you work results of the two artists looking for answers to very important and acute issues: what freedom is and where to seek it in the modern world.

The theme of freedom is one of the key items in my work and the one I have been constantly turning to for more than ten years. This project is based on the study of the history of Latvia with an emphasis on the events I believe to be the most significant for the topic under review. I have studied documentary materials on the Baltic Way of 1989 and made use of pictures of the Lenin monument being taken down in the city of Bauska in 1990, pictures of the Europe Day celebration in Riga and sports victories at the Summer Olympics in 2012, as well as items and images taken from the contemporary daily life.

Unity syndrome is a devised term that refers to the idea of the European Union and to what is happening in it now. Back in the times of the Cold War, the idea of the united Europe was to a great extent based on the opposition to the socialist dictatorship, but after the collapse of the USSR purely economic goals prevailed. Striving to promote the material well-being and to establish uniform life quality standards has had the result of many European countries now actually losing their identity.

The installation includes paintings which are an integral feature of a wealthy house and, at the same time, an artistic way of testifying to historical facts. Stones that have been collected near the World War II memorial (the Forest memorial, Riga) are painted in red and somewhat resemble a heart shape. Fragments of stucco molding, a symbol of former power and greatness, are painted in colors associated with the Soviet aesthetics. Old harvest boxes serve as a support to the stones, molding fragments and old local magazines. Although these and other installation elements duly belong either to the decoration of a house or everyday household activities, they leave an impression of incompatibility and confrontation.

By mixing up and interwining the iconic elements of the past and everyday life items, I try to create an awareness of how the pieces of identity and the historical context on the whole are being blurred and lost in the current moment. By creating a visual conflict, I aim to evoke the emotional tension and а desire to start a discussion about the contradiction between freedom and economic benefits, between the comfort of uniform life standards and the national identity.

Searching for Freedom: I Am What I Am

It is good to create, to talk and to write about freedom in free format. At the same time, any kind of form, shell or border already represent a certain limitation, a kind of non-freedom.

We are born in the material world and come to be dependent of matter. Wary of becoming money-bound, I did not go to live to Italy, the home country of my maternal ancestors. It seemed to me that it was impossible to stay free in a world where money ruled, least of all, to be a free artist there. So I am staying where I was born, on the Island of Freedom. This name was given to Cuba by people who craved freedom at any cost. They got what they wanted. And this can be freedom in this world where God gave everyone the right to choose their path.

As a gift to a little girl, Ítalo brought a shell from the shores of the Atlantic Ocean. He did not know yet that the little souvenir would inspire him to create a canvas that would become key to his work on the coast of the Baltic Sea. He did not yet know that the shell would turn into a unique symbol of freedom for him.

— Put the shell to your ear, can you hear the wash of waves?!

— Is the ocean talking to me like that? How did it fit in there? Or is it like a mobile phone?

— Good thinking! You know, a person is like a shell, what we see is no more than a shell cover, but there are so many feelings, thoughts and images inside that the whole universe could hardly accommodate them.

I believe that we live in a world created from our ideas about it. My world is inside my paintings, they show my feelings and give an idea about my fears and problems. And, perhaps, only with the help of paints and canvas, I begin to understand who I really am.

I do not often paint landscapes. But when I do, I learn from nature, learn to be myself, learn not to be constrained by fears and limitations, learn to just be. I was struck by the nature of the Baltic coast, its beauty and inner balance. This grass and forests possess a great strength, a power that allows to die in winter, keeping the memory of life and the sun, and then to reborn again in the spring. If we could learn from nature this inherent freedom of being, no one would ever be able to take away from us this wonderful feeling, the sense of inner freedom!

The new exhibition of RZ art collection is currently on display at the City Museum of Liepaja. The exhibition Searching For Freedom presenting two contemporary artists, Ítalo René Expósito (Cuba) and Misha Levin (Russia), is open for public from September 15th till October 1st, 2017. 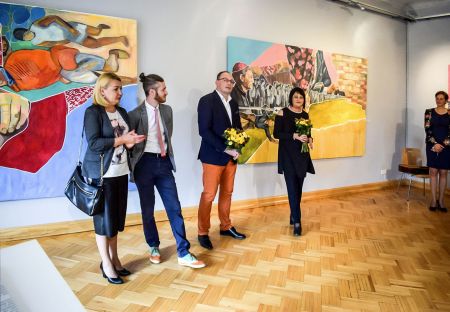 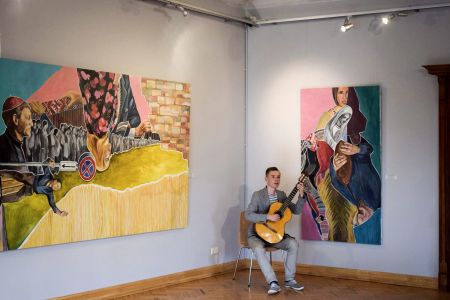 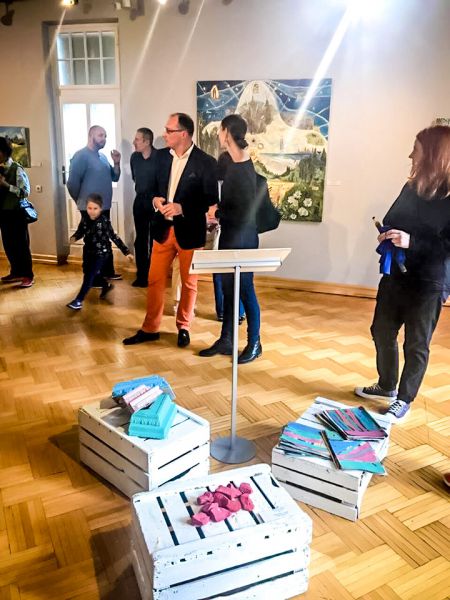 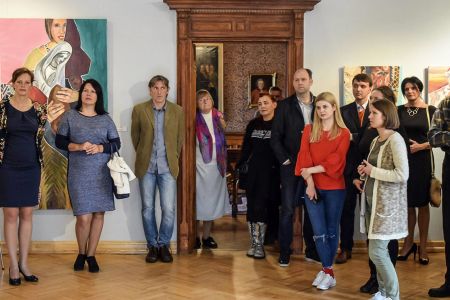 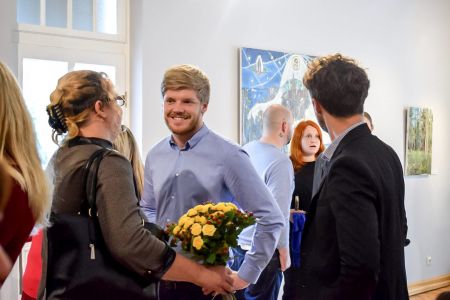 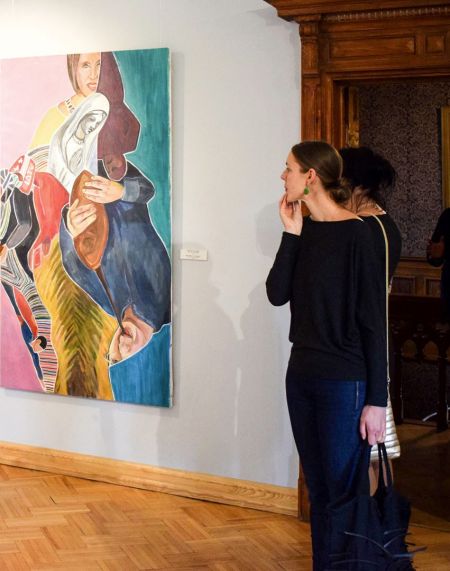 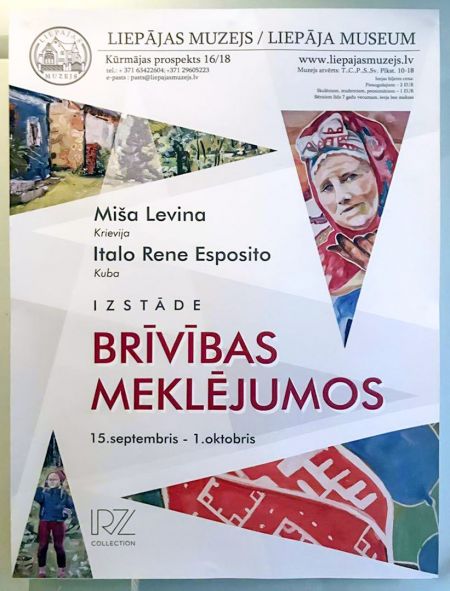 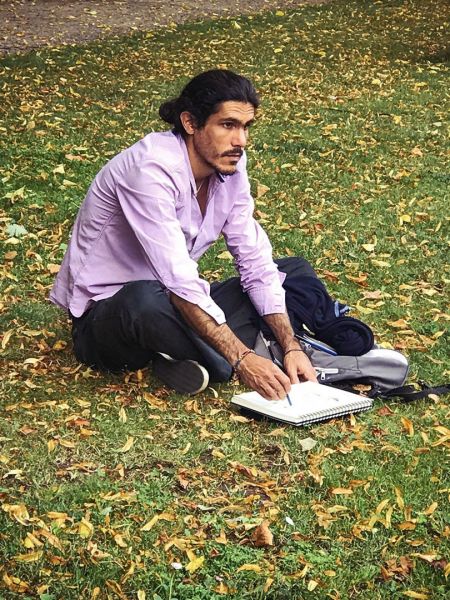