I was born in June, 1954 in the Astrakhan region, the steppe zone where the horizon merged with the sky and the river. Perhaps, it contributed to my breadth of perception. While at school, I sketched stoplessly. All my notebooks were full of drawings and a few of them ended up on the board of shame as "the school’s dirtiest notebooks". I was greatly influenced by my teacher of drawing whom I used to assist in decorating the school. My posters were still in use long after I left the school.

I never gave much thought about becoming a painter. My teenage environment was infatuated with the criminal world, there were punk swaggering, violence, youth gangs, fights and the like. That all changed when I got into the military service. After the service I met my future teacher. To begin with, he started an offhand discussion of art and painting while I just mumbled something and kept silent most of the time. After one of our long conversations I decided to go to an art school. That’s how my artistic life took off. Four people stand out at the beginning of my career: my first teacher Agrippina Kiseleva, my teacher of drawing Anatoly Dubovsky, the Director of the Astrakhan Art School Alexander Bagmet, and the artist-teacher Shamil Abdul-Hamitovich Taktashev. I am infinitely grateful to all of them.

In the times of perestroika I moved to Leningrad. This city, its people, and my colleagues painters became my new teachers. It was there that I established myself as an artist and self-actualized. Prior to 1987 I did not contribute to any exhibitions. My early works have not survived, they were destroyed. As an artist, I am mostly interested in two themes — the image of the city of Leningrad, now St. Petersburg and the value of the human person. In my paintings I reflect on the essence of being a modern man and attempt to get a feel of the living nature of everything that surrounds and creates us. 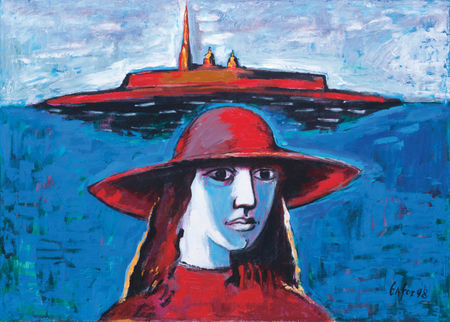